For the #WIN15 - The Event, An Experience & MY Achievement

In my almost 7 odd years of blogging (though not so regular) there has not been an awesome-r moment to witness my own contribution to a book being launched in front of a whole audience of veteran and renowned bloggers at WIN 15 (Write. Inspire. Network) 2015 an annual event by BlogAdda.com entered its second year and I was going to be a part of one of the the biggest events in the blogosphere - A book launch by bloggers!
I just could not miss this for the world!

So on 20th September 2015 - Blogadda's WIN15 happened, and let me take you through the event in pictures:

A lot of interesting sessions and with various topics at WIN15.

Sessions started with Lakshmi Pratury, Host & Curator of INK Conference on the aspects of storytelling. Next up Rezwan Islam talking about the influence of blogging and social media in current affairs of Bangladesh, followed by Ajay Jain; who wooed the audience with his charisma and travel mantra. Sure had me almost hook, line and sinker to take up Jordan as my next destination. He explained how a day in his life goes. Anaggh Desai (the God ) and Aditya Magal (the fake jhunjhunwalla on twitter) had a tete-a-tete that had all of us rollicking in laughter. Prashant Challapalli, Shrutijith K and Calamur delved more into the media aspects of social media and blogging.

The GameOfBlogs book launch was the highlight of my evening. It was no lesser than an academy award ceremony for me as I stepped on stage for the unveiling of the book. I was rubbing shoulders with Writer Natasha Badhawar, Actor-Singer Suchitra Krishnnamoorthy, the representative of LeadStart Publishing and the CEO of BlogAdda, Nirav Sanghvi plus the writers of the other teams and it was oh so surreal!
We were handed a copy each and were asked to sign it. My first ever book signing!
A few words were exchanged with the audience and then I had it in my hand: My very First Book 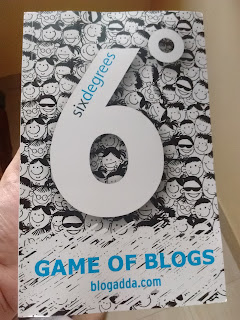 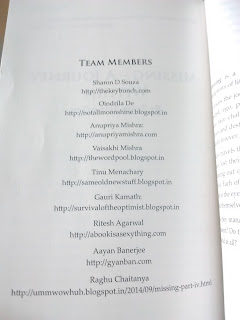 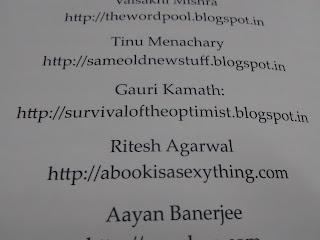 All that transpired on that day was awesome to say the least. I learnt a lot of tips and tricks, met many like minded bloggers, savoured some good food and enjoyed the event.
Looking forward to the next WIN!

So, Is your glass half empty or half full? ;)