31 is a thriller on how life revolves in a multinational corporate bank in India. When I was chosen by Blog Adda to review this book, I was pleasantly surprised on how the author of 31, Upendra Namburi has made the situations a manager is in akin to reality. Secondly, it struck a chord with me as it was related to my interest – Sales. 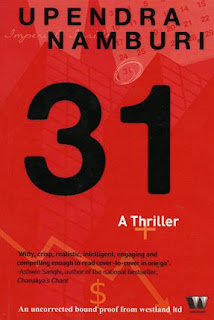 The exact copy of the cover of the book I received (picture courtesy: thehindu.com)

It has all the ingredients as one would expect in a corporate ‘thriller’. All the managerial melancholy that takes place: from junior to manager to senior to super seniors. The protagonist, Ravi Shastry, is the guy who tries hard to upturn the tide in his favour when his company is pulling the plug and runs a tight ship to prove his mettle to his bosses even when surrounded by a credit card scam and a manipulative HR manager.
Not only is he faced with task of preventing his performers to be poached, but is also trying to secure his behind when and if he is axed.

31 paints a grim picture of Indian bosses and a foreign one as such. It depicts how the daily grind for any middle level manager is not in just indulging the luxuries of the gleaming designation but in fact to tactfully tackle boss’ antics and manipulative behavior.
Especially when its time to jump ship, bosses are out to save their own skin, nobody is nobody’s best friend.

Overall the author has highlighted how corporate life of a middle level manager can ruin his personal life – having an affair, indulging in illegal activities, getting framed, how one’s life pretty much revolves around a Blackberry, getting hooked to a social media site like Twitter which acts like the office grapevine – for good.

What caught my fancy is they manner in which the chapters are narrated. Each chapter is a day in the life of the most crucial and the toughest month for every person in Sales: March. As March spells appraisals, bonuses’ and employee reviews.
31 chapters in all the book and each depicts the event at specific time, twists and turns galore.

I would recommend this book to a lot of students and just-started-their-career and first-job-ers as it gives you a glimpse of corporate life and the taste of the real world. All in all this is an interesting book, a page turner right in the middle, all woven in a lucid language.

This review is a part of the Book Reviews Program at BlogAdda.com. Participate now to get free books!
Posted by Gauri at 11:16:00 PM No comments:

I'm not a Sallu fan, so this post is NOT about him; you may gladly move on to the next blog


This is post a cutting review of the Book Hot Tea Across India by Rishad Saam Mehta and hence the title. Published by Tranquebar Books is priced at INR 195.
The mild yellow book cover is designed with some snippets of the various chapters of the author's journeys inside and the tea rings for the obvious hero of the book. 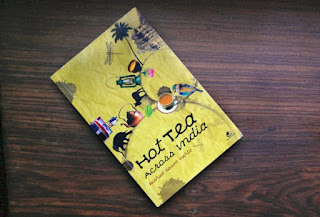 If you loved the countless road journey kind inspired movies or TV shows- ZNMD, Euro Trip, Road Trip, etc. or even enjoy Highway on my Plate- you get my drift, you're bound to love this book. Rishad gives a monologue of his various journeys alone or with his friends across the length and breadth of the country revolving around having a hot brew every where he goes. Each journey is enveloped well with a chai ki pyaali be it the cold of the north, the humid of south, the cutting of the west or yak like tea of the east.


Perfect for those who enjoy the spontaneous, drop-of-a-hat traveling. The author reprimands people who are all gung ho about traveling on a whim and do a U-turn; all in all the momentary bravado:


I've been in umpteen situations where I've heard people loudly declare that they're fed up of their routine and mundane existence and all I have to do is to make the call and they'd be ready for a road trip at the drop of a hat. 'What's the point of existing without excitement? I'm ready to kick routine, hit the rod and live on the wild side', are some of the things I've heard and my answer is always the condescending smile. Because when I do actually make the call, I rarely find the spontaneity that seemed to overflow at the party with the drink in hand. There is usually a 'horrible, demanding boss' not granting leave or a 'sulking spouse' throwing a tantrum'


Rishad aptly describes his journeys with graphic descriptions at certain turns, keeping the reader's sensibilities and tongue-in-cheek humor that colourfully paints his incidents and encounters.
Of all the experiences named aptly as chapters my favorites are 'The Highway Man and a Buffalo Instead of a Can', 'Jolly Jhunjhunwala and the Great Bike Chase' and 'And then there's the food of course' and ‘May we Please Kindly burn your car?’.

Fascinating book to say the least, it is must read for those who are inspired to travel sometime ever in their life for the love of the spontaneity; own a bullet and would kick start it to life just to hear that 350cc engine sing or even enjoy that odd cup of tea on a lone lamp lit street in the foggiest weather one could possibly imagine.
This one's a keeper!

This review is a part of the Book Reviews Program at BlogAdda.com. Participate now to get free books!
Posted by Gauri at 11:50:00 PM 2 comments: